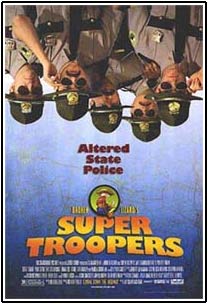 I saw the Swedish film KOPPS with my brother over the holidays. It's a hilarious film, telling the story of a small Swedish police station facing closing down due to no crime in the area. Of course, the cops start "adjusting" the crime statistics in various ways, and the story is well-told, with strong characters being well-portrayed by director & writer Josef Fares.

However, while watching the film I couldn't help noticing that there were several similarities with a film my mate Agnar and myself saw on DivX a late night in Germany last spring. After digging a bit (and consulting with Agnar via ICQ), we found the name of that movie: Super Troopers (publised in February 2002 by Cataland Films and Fox Searchlight Pictures).

The similarities are massive in both plot and execution, but in a comparison I suspect Super Troopers would come out marginally better on the funny-scale (maybe because of its wicked German prisoners? (a joke you can only understand after seeing the film)). Did Josef Fares see Super Troopers before he made Kopps? I don't know, although it is not unlikely... (side note: would he sue me if I hinted at it? I dunno) -- either way: go see both if you have the opportunity!