Anders Jacobsen's blog
... because the Internet changes your life...
The Matrix at IMAX 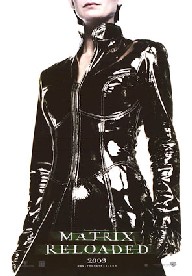 Count me in for the IMAX showings of the next Matrix films: Yahoo Finance: Imax Says Matrix Film Deal A 'Watershed Event':

Earlier Wednesday, Imax and Warner Bros., [...], announced that the second and third chapters of "The Matrix" trilogy, to be released in the spring and fall, will be digitally-remastered using Imax DMR - a technology that upgrades live-action 35mm films into the Imax experience.[...]

Although "The Matrix Reloaded" will open in Imax theaters two or three weeks after its general release May 15, "The Matrix Revolutions" will open Nov. 5 in both conventional and Imax cinemas, marking the first time that a live-action Hollywood film is released concurrently in both large- and standard-sized formats, known in the industry as a day-and-date release.(via Richard Giles, image from allposters.com)

That's just wonderful. Trust the Imax movies that would interest me to start coming *after* the Imax theatre in Oslo had to close. Or maybe this is what it would take to get it reopened? Hm.
http://www.oslopuls.no/cityguides/nav/news.jhtml?context=movie&id=444382