Anders Jacobsen's blog
... because the Internet changes your life...
Feminists that can't take a joke 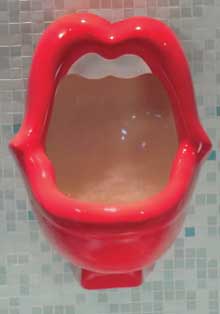 Feminists that can't take a joke damage their own cause.

Virgin Atlantic was planning to fit some funky, fun urinals at their new "clubhouse" (that's their business class / frequent flyer lounge) at JFK airport, but the ever-vigilant National organization of Women (NOW.org) put an end to it. Too sad Virgin gave in to the pressure; I'd quite have fancied a visit to the clubhouse loo for a laugh :-)

According to BoingBoing Virgin responds to the complaints:

The urinals were intended to be one of the more fun and quirky features of the new JFK Clubhouse, a project overseen by Virgin's in-house design team led by two female designers. The urinals themselves were the idea of a female designer, and we were surprised by the public reaction.

However, Virgin Atlantic always aims to listen to our passengers and the general public, and as a result of the feedback we have received we will not install the urinals in the bathroom at our new JFK clubhouse. We trust our swift action will help restore your confidence in our company and thank you for taking the time to contact us.

I find this hilarious. Both the fact that Virgin Atlantic were going to put them in, and the fact that people started complaining. I'd agree that it's good for a laugh - though I'd personally feel a bit intimidated imagining any woman with a mouth that big!! :)

You don't have to be a woman or even a feminist to see why this is totally offensive and tasteless.

Jokes that are offensive to many and funny to others are not uncommon, but they don't belong in (semi-)public spaces like this.

The idea or .... into anyone's mouth, male or female, seems to me to be rather sick.

Somehow the 'feministis who cannot take a joke' thing is a very pervasive discussion lately. Anyhow I must agree with Seun that I'd find it equally sick to equip the womens bathrooms with some equivalent I cannot imagine right now.

The thing by itself made me laugh at first but the thought of putting them in usage makes me glad I am not a guy ;-)

Why, exactly, do feminists "who can't take a joke" damage their own cause? That really is a cheap line: you don't discuss the issue, you don't try to understand why people might be offended, you simply write us off as unable to take a joke. It works wonderfully as a strategy for derailing a discussion , or as a hersketeknikk, a technique to dominate others rather than to discuss an issue.

Why is criticising something for being offensive translated to "can't take a joke"?

I think this suggested urinal is s*xist and demeaning. It's not just objectifying woman (the mouth ready to give a bl*w job), in addition the mouth is meant to be p*ssed into.

Jill is not a feminist, she is a winger. A feminist is an advocate for the rights of women, Jill seems to rather that women are seen as boring and easily offended. With women presented like this, their value as good people is diminished, no wonder people are inclined to value women as objects rather than people (as Jill seems to prefer). I am a feminist and I believe that feminist's worst enemies are wingers. Boring dull and shallow wingers!
Please don't hate us, hate wingers!